When Madison wrote her initial post on selling on Amazon, I was skeptical. Could making money on Amazon really be as easy as it sounded? Like many of you, I downloaded the book she referenced and read it through. Starting now to believe, I decided to go ahead and give it a try since it really wasn’t going to cost me money, other than to buy the products and then ship them to Amazon. The following is my personal experience with selling on Amazon. 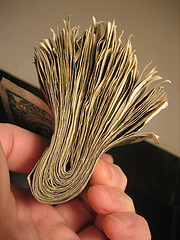 When I first started out, I followed in Madison’s footsteps. I headed over to my local Target to scour the clearance toys. Unfortunately, everything I found on clearance at Target was close in price with Amazon. Determined to figure this out, I headed over to Marshall’s and rummaged through their toy section. Again, I came up empty.

My next attempt was to try online. So I hit up the online sites of Target, Toys R Us and Walmart. Still, I came up empty. It was at this point I decided to take some time off and contemplate if making money on Amazon was really for me. As I thought about things, I realized that my interest lies more with electronics than with toys.

When it comes to toys, I don’t have kids. I have no idea what is the “hot” toy at the moment. I’m a mid-30’s guy. I know electronics. So I switched my strategy to focus on electronics.

The difference was night and day. I was able to find things at my local Best Buy as well as many of the other local Best Buy’s. Many times I would work in a Best Buy run to a different store when I would visit family and friends around me and also while on vacations.

Now don’t get me wrong, it wasn’t as if I was finding endless deals. I was finding maybe a deal or two every week. I spent about an hour or two per week researching stores to find items.

I did my best to stick to a formula of the selling price on Amazon being at least double the price I paid. But sometimes I took chances. These chances worked out on occasion and also failed. I stuck mainly with Best Buy because the credit card I used to buy my items offers 5% cash back when I shopped through their online mall, which Best Buy was a part of. Additionally, I signed up for the Best Buy Rewards Zone, which gave me a $5 coupon after I spent $250. All of these went towards increasing my margins.

The selling part was easy. It took me a little bit of time to set the items up in my account and to pack them up, but once I shipped them off to Amazon using Amazon FBA, my work was done. I just sat back and waited.

For the most part, my selling went in spurts. I would sell nothing for a few weeks, then sell 3-4 items in a week, followed again by no sales.

As Christmas approached, I was torn again. I had a lot of priorities over the holidays but I was making some money on Amazon. Everything I read said that Christmas was a gold mine. What no one did say was that January was horrible. Not because of a lack of sales, but because of all of the Christmas returns. More on this later.

I decided to go all in for Christmas and buy a ton of items. Even if they weren’t selling quickly now, if I thought they would move, I bought them. I even searched for hot Christmas toys and ended up buying a few Furbies too!

All of the hype about selling on Amazon for Christmas was correct. I sold the Furbies in a day (I kicked myself for not buying more – they were buy one, get one free as a Black Friday special). I sold out of my inventory with about a week left before Christmas.

Come January, I had taken some time off as Best Buy really didn’t have anything on clearance. I did get one return on Amazon. I still question it as the seller claimed it was defective. Amazon even told me they couldn’t sell it as used/open box. When I received the camera back from Amazon, it was in perfect condition and I am using it as my own personal camera now.

I am sure you are interested in my earnings. Overall, I made just over $1,200. My average return was 38% per item. This takes into account all Amazon fees and any cash back I earned from my credit card.

For anyone looking to try this out, here are my tips for you:

Pick something you love. I tried toys because Madison made it work for her. But like I said, I have no involvement with toys right now so I couldn’t sell them. I enjoy electronics and was able to make them work. When my wife and I have kids, I am sure I’ll dip my toes into the toy category again.

Start slow. It takes some time to figure out the fees and making sure you are going to make a profit on items. I still stick to the “double theory” which is I have to sell the item for at least double what I bought it for. So, if an item is costing me $50, it has to be listed on Amazon for at least $100.

Pay attention to sale frequency on Amazon. By this I mean look to see how often people are posting reviews. The more recent the reviews, the stronger the chance that you will sell the item quickly.

Stay Positive. It can get frustrating to not find any items to sell or to buy items and not sell them. Be patient. If you did your homework, your item will sell. If you want, you can play around with the sales price too, but I would suggest you only do this as a last resort.

In the end, I enjoyed my experience selling on Amazon. I made a nice amount of money for the time I spent searching for items to sell. As I continue to sell on Amazon, I continue to find new places that have items I can sell for a profit. You can sell on Amazon and make money. But like anything in life, it does take some effort on your part.

Comments to Selling on Amazon to Make Money: $1,200 Success Story


Previous article: « 12 Cheap Anti-Aging Tricks
Next article: How to Get Free Products at CVS and Walgreens »