Payroll Tax Cut: What Your Paycheck Will Look Like

There’s been lots of news recently regarding the tax compromise that President Obama struck with congressional Republicans. With the extension of the Bush tax cuts, people at all income levels will see their income tax brackets remain the same through 2012, and the AMT exemptions expanded.

The tax compromise also calls for a reduction of an employee’s portion of payroll taxes, called the “payroll tax holiday”. At the same time, the Making Work Pay tax credit, which was enacted as part of the stimulus package, is expiring. That credit allowed employees to earn a credit of 6.2% of wages, up to $400 total, with a phaseout for those earning over $75,000. The Making Work Pay credit expiration will mean an increase in taxes and thus a decrease in take-home pay – but for most people that decrease will be more than counteracted through the effects of the new payroll tax cut.

2013 Update. The payroll tax cut expired and was not included in the Fiscal Cliff Deal. The 2013 rates will return to normal.

Like the Making Work Pay credit, this tax cut will be figured into each paycheck you receive throughout the year, giving you a small boost in take-home pay that legislators hope you will spend to help stimulate the economy. Since you receive the tax reduction as a percentage of your total employment income, there should be fewer of the types of issues that caused some people to have to repay the Making Work Pay credit.

So what everybody really wants to know is…if the payroll tax reduction passes, what will paychecks look like come 2011?  The graph below illustrates the annual effect of this federal payroll tax cut as opposed to the Making Work Pay credit. 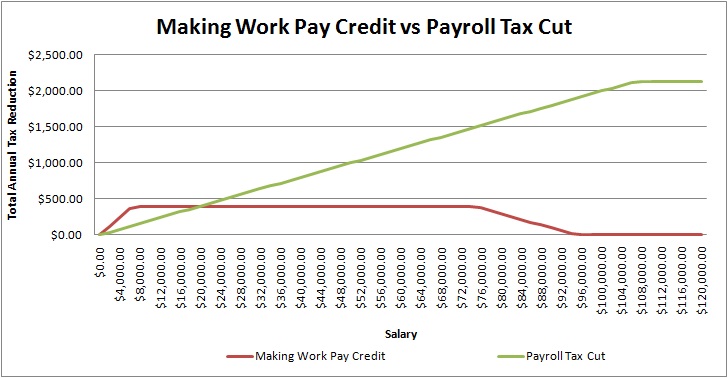 With the expiration of Making Work Pay and the start of the payroll tax credit of 2011, most people will see an increase in their paychecks. The graph below shows the difference in weekly income that most workers will see in 2011. Those making over $20,000 will enjoy an increase in their paychecks when compared to 2010 while those making less than that (which includes minimum wage workers) will be looking at slightly less money in 2011. 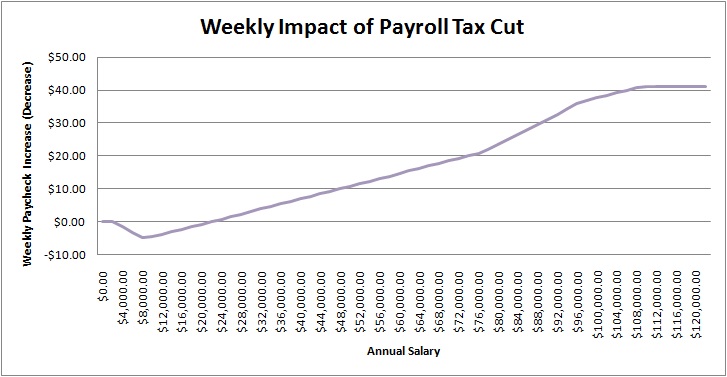 Of course the comparison above is not true for everyone – if you’re part of a system that does not pay into Social Security (such as many state and local government employees, including teachers) you will see a decrease in your paycheck due to the expiration of Making Work Pay and the fact that you have no payroll taxes to have reduced. Retirees are in the same boat as there is not currently an equivalent tax cut for retirement income.

If you’re going to benefit from this tax cut, take this opportunity to bump up savings and/or retirement contributions to help you meet your goals for 2011 and beyond.

If your paycheck will decrease, check out some of these ways to manage your budget, save money on food and come up with extra cash.

Comments to Payroll Tax Cut: What Your Paycheck Will Look Like


Previous article: « A Stroll Through Our Holiday Traditions
Next article: Last Minute Shopping Bonuses and Deals »