What is a Social Security Tax Wage Base?

Social security taxes, (or OASDI taxes) are the taxes that are taken from your paycheck to contribute to the social security program. However, there is a wage base limit, and earnings above this amount are not taxed.

The social security tax wage bases are per person, and are not impacted by a husband and wife who meet the wage base when adding their incomes together. It’s also not impacted by your tax filing status or dependents. 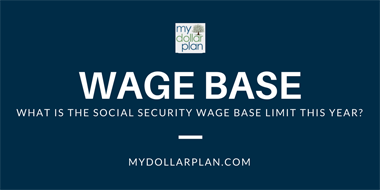 What Happens When You Reach the Social Security Limit?

Any earnings over the tax wage base are not subject to social security taxes. Reaching the taxable wage base allows you to take home more of your money in your paycheck and save on taxes.

In fact, I once had a professor in college, who used the social security wage base as an earnings goal each year, because once you earned money over the limit, it was like getting an automatic raise.

However, it’s also important to understand that those same limits will apply when you qualify for Social Security and your benefits are computed.

The social security tax rate is separate from medicare taxes, currently at 1.45% (or 2.9% for self employed), which has no wage base limit. It increased to 2.35% due to the Health Care Reform Bill for high earners. The increase is part of what funds the Health Insurance Premium Tax Credit.

Here are the social security taxable wage base limits for each year since My Dollar Plan started:

Social Security Statements. Be sure to review your social security statement every year and make sure the earnings amounts are correct. Otherwise, An Administrative Error Could Cost You Your Retirement.