The annual tax deadline is here. Is your return done… or is it time to file an extension? If you are done, it’s time to celebrate with some fun tax facts. You might think to yourself that it is an oxymoron, since taxes can’t be fun. I’m not here to talk to you about the 1040, your 1099 or the sales tax deduction. No, I am here to point out some of the more interesting facts about taxes. Hopefully by the end of this post, you will have a smile on your face, or at least learned a new fact – that isn’t boring! 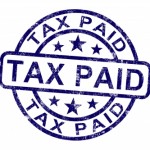 There are certainly some interesting tax facts that I have included in this list. I am sure there are plenty more as well. Do you know of any interesting facts about taxes? Have you heard any of the ones I listed? Share away!


Previous article: « Finance Tips: Will You Take a Home Office Tax Deduction?
Next article: How I Made $10,000 Selling on Amazon »