Do You Know What ATM Skimming Is?

Previously I wrote about identity theft, both ways to protect yourself along with ways to recover from identity theft. Next I’m going to talk about a certain type of identity theft that is growing in popularity all over the United States. It’s called ATM skimming and it is very easy to fall victim to it.

What is ATM Skimming?

ATM skimming is when a criminal places a card reader, called a skimmer, over the card slot at an ATM machine. In most cases, if you haven’t used the ATM machine in question before, you might not even recognize that there is a skimmer on it. They are designed to look exactly like a normal card reader would. Look closely at the picture below. See the subtle difference? I bet if you saw the ATM with the skimmer you wouldn’t think twice about using it. 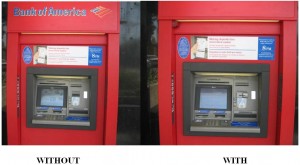 How Does Skimming Work?

The skimmer works like this. As you slide your ATM card into the slot, the card passes through the skimmer. The skimmer collects your information from the magnetic strip on the back of the card. Your card passes into the real ATM reader. From there, you enter your PIN. There are two ways the criminal can get your PIN. The first is by installing a tiny camera somewhere on the ATM to capture you entering your PIN. These cameras are super tiny and again, unless you really look for it, you aren’t going to notice it. The second option is to install a keypad over the real keypad. The fake keypad simply records your entry.

In the end, you walk away with your money from the ATM without even knowing that your data was breached. The criminal comes back to the ATM at some later point and takes the skimmer and the camera or keypad and starts withdrawing money from your accounts.

I mostly talk about skimmers being placed on ATM machines. In reality, they are placed everywhere there is a card reader. Another popular spot includes gas stations. All of the same technology is used. ATMs tend to be more vulnerable, however, since there is less traffic and the criminal can therefore install and uninstall the skimmer without having to worry about getting caught.

There are reports now that criminals are beginning to target ticketing machines for their skimmers as well. But the scariest part is that the newer generation skimmers allow the data to be sent via Bluetooth so the criminal never needs to uninstall the device to get the data.

How to Protect Yourself?

For one, you need to pay attention to where you are withdrawing your money. If there is an ATM out in the middle of nowhere and little traffic, be on alert. Try to stick with ATM machines that are inside stores where the criminal will have a harder time installing the skimmer without being noticed.

But don’t just assume that the ATM is safe if it is in a store or high traffic area. Make sure you look at the machine first. Take notice to anything that seems odd. One trick the criminal will use is if there are two ATM machines next to each other, they will place a sign on one telling you it is out of order and install the skimmer on the other machine.

Another step is to write your Congressperson. ATM skimming is virtually non-existent in Europe. The reason is because in Europe, credit and debit cards have a chip on them that contain an algorithm. Skimmers are unable to collect this algorithm and without it, payment using the debit card will not be made. By writing to your Congressperson, we can hopefully push the banking industry in the United States to start using the cards with a chip inside them.

Not many cards in the US have the built in chips, but there are a few travel cards with chip technology you can use if you are traveling abroad, including the Citi ThankYou card.

ATM skimming is on the rise and will continue to rise until preventative steps are taken by the banking industry. If you don’t think you need to worry about this, you need to think again. A quick search online will yield results of not only how to install skimmers, but also ones for sale. The price of entry is not a deterrent either. Be sure to practice safe use of your ATM card. While using a credit card is not ideal for everyone, they tend to offer more protection than a debit card when it comes to fraud and additionally, your bank account won’t be sitting at zero until the investigation is complete confirming fraudulent activity. That investigation can take months to close.


Previous article: « Should You Reinvest Dividends?
Next article: 4 Reasons Why You Didn’t Get a Tax Refund »