Why Do People Invest in Gold?

Gold has plummeted close to 30% in value. Gold was once valued at over $1,700 an ounce but now is sitting at around $1,200 an ounce (as of last week; see the current gold price for today’s gold rate). So what’s the deal with gold? Why do people invest in it and what’s up with the wild price swings recently? My goal is to provide you with a better understanding of gold so that you can be a better investor. 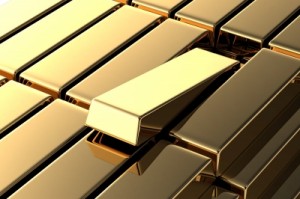 Why Do People Invest in Gold?

For the most part, investors invest in gold for two reasons:

Let’s look into each of these a little more. People buy gold to hedge against inflation. This means that people think that inflation is going to be rising. When inflation rises, you need to earn more return on your money to have the same spending power. Because banks take their time raising interest rates for deposit accounts and the volatility in stocks, people flock to gold. They see it as a safe bet against rising inflation.

The second reason is when banks are paying little to no interest on deposit accounts. Since this has been the case for the past five years, people have been flocking to gold as a possible alternative to low interest rates.

Both of these reasons have occurred since the housing collapse in 2008. Many people feared rapidly rising inflation rates and with interest rates being held down by the Federal Reserve, many investors had nowhere to turn but to gold.

However, there was a third factor at play here. Because of the seriousness of the housing collapse and countries in the European Union teetering on collapse, many feared the world’s financial markets were going to completely collapse. As a result, people invested in physical gold should paper money become obsolete.

All three of these factors helped increase the demand for gold, which drives up the price. But why the sudden drop?

Why Did Gold Drop in Price?

In June, Federal Reserve chairman Ben Bernanke said that the Federal Reserve is going to slowly stop printing money at its current rate, but he didn’t say when this would happen. (A little background here, the Federal Reserve has been printing money and injecting it into the bond market to the tune of $85 billion a month to keep interest rates artificially low. Doing this would hopefully drive people and business to borrow money at super low rates. The downside to this is the belief that it could lead to much higher inflation.)

When Mr. Bernanke said that the Federal Reserve would be slowly cutting back on the printing of money it signaled that the economy was slowly improving and that the fears of rapidly rising inflation were overblown. As a result, those that invested in gold to hedge against inflation had no further need to worry and they sold out.

Back in the day, if you had gold, you were a king or queen. Since gold has a limited supply and is difficult to obtain, those without gold usually remained without gold. But the prospect of obtaining gold and becoming filthy rich is still ingrained in us to this day. I personally question why this is. If the world financial markets were to collapse tomorrow and paper money was worthless, why would I want gold? I would rather have food and water. I would not be interested in trading someone my cow for gold. I would want something meaningful to me in return – food, water, supplies for shelter, etc.

Gold is used as hedge against inflation. Why did gold spike and then plummet? It spiked because investors feared the worst – that the global economies were going to collapse from all of the governments printing excess supplies of money. As more and more investors bought into this fear, the price of gold continued to rise. (Up until the bubble started the majority of gold was bought and used in jewelry but by 2009, almost half of all gold was bought by investors. More proof of a bubble: all of the cash for gold advertisements you see everywhere. Remember, you know it’s a bubble when EVERYONE is getting in on it.)  Recently we have seen that their fears were unfounded. As a result many have fled gold, leading it to drop in price dramatically. It’s the classic story of a bubble. Does gold have a place in your portfolio? A small percentage may, but you shouldn’t be selling out of everything and going 100% gold. That plan is simply fool’s gold.

Comments to Why Do People Invest in Gold?