You hear about inflation all of the time, yet many do not understand what it is or how it is measured. The definition of inflation is the rate at which the price level of goods and services rise. Historically, inflation has averaged around 4% per year. This means that something that costs $1.00 today will cost $1.04 next year and something that costs $100 today will cost $104 next year. If you were around back in the late 1970’s and early 1980’s inflation spiked up to around 15%. If you were a saver, this was welcome news as interest rates on savings accounts were in the double digits, unlike today when they are under 1%. If you were buying a home, you could expect to pay a double digit mortgage interest rates as well. The smart savers back then locked in long term bank certificates of deposit, earning a high rate of interest even when rates dropped by the mid-1980’s.

Today, inflation is 2.2%. Some will argue however, that the real inflation rate is higher than this. This is because there are two measures to inflation, the Core CPI and the CPI.

How CPI is Measured

The CPI takes into account the price changes of food, beverages, housing, apparel, transportation, medical care, recreation, education, communications, and energy. Core CPI backs out food and energy to come to its number. Why is this important? It is important because in the economic environment we are in today, food and energy prices are rising quickly. This causes the CPI number to be higher than the Core CPI number, as seen in the chart below. 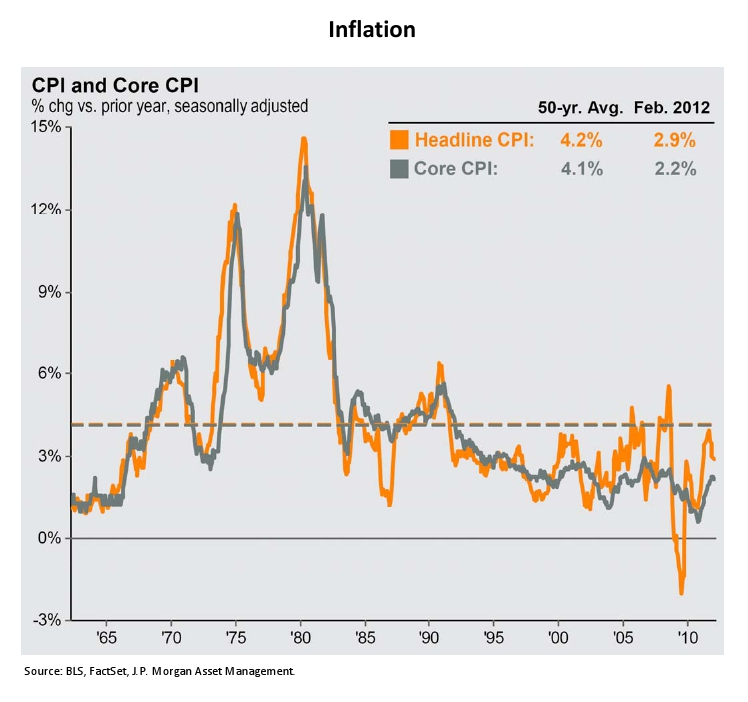 So why are these two factors removed? Because of their high volatility, they are removed from the Core CPI figure. Realize that the information in the inflation reports are used by the Federal Reserve to help control future inflation. The Fed is trying to limit the growth of inflation. They are not worried about what inflation is today. Because history has taught us that the more reliable measure of inflation is the Core CPI (the inflation measure that removes energy and food prices), we tend to focus on that.

When is Inflation Bad?

Inflation is bad when it is not controlled. As consumers, we can deal with the cost of goods rising at a rate of 4% per year. But if prices rise too fast, businesses react by hiring more workers to produce more goods. More workers means that wages have to rise because there are fewer unemployed people. When wages quickly rise, workers have more money to spend. Spending money increases demand and the cycle repeats itself. Why is this bad? Because you eventually get to a point where money isn’t worth the paper it is printed on. For example, look at Zimbabwe. The inflation rate there a few years ago was 231 million percent. You read that right. If a pack of gum in Zimbabwe cost $1 last year, this year it costs $231 million. When this inflationary bubble bursts, billions of dollars will be lost.

Is Anything Worse than Inflation?

It isn’t much fun knowing that an item today is going to cost you more to buy it next year. But there is something worse than that and it is called deflation. Deflation is the exact opposite of inflation. Instead of prices going up, they go down. Before you start telling me how great that would be, read on.

To begin, in order to have deflation, the economy needs to have a greater supply of goods and services than there is demand for. When this happens, prices at every level drop. A greater supply than demand means that businesses are over-producing goods. They will cut back on production, meaning they will lay off workers. With fewer people earning wages, fewer people will by buying goods, meaning prices will continue to drop.

What’s worse is that banks won’t loan any money because with falling prices, they will be losing money. Who wants to loan $100,000 to someone and in 30 years only get back $25,000? Because of that, everyone hordes cash and doesn’t use it. Those that can buy stop because again, why pay $3 for a gallon of milk today when you can pay $2 for it next week? The entire economy grinds to a halt.

A modern day example is the housing market. For the past few years, supply has outweighed demand. This has caused prices to drop. With dropping prices, no one is buying a home because it will be cheaper in six months. As a result, prices continue to drop. Now apply that to the entire economy.

As you can see, inflation is a necessary evil in our economy. While it causes the prices of goods and services to rise over time, as long as it is kept in check, it does more good than harm.

Comments to What is Inflation?