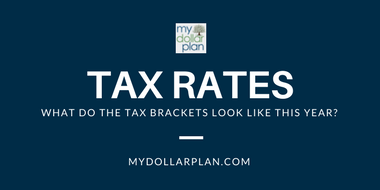 Projected tax rates for the future can be found in the 2018 Tax Brackets. Current year and historical tax brackets are below.

Here are the federal 2017 tax tables and final 2017 tax brackets from the IRS:

The IRS released the final 2016 tax brackets. Here are the federal 2016 tax tables:

The IRS released the final 2015 tax brackets. Here are the federal 2015 tax tables:

Here are the federal 2013 tax tables:

The finalized 2012 tax rates and 2012 tax brackets are based on the following tax extensions:

The finalized 2011 tax rates and 2011 tax brackets are based on the following tax changes:

Here are the federal income tax rates for 2011 from the IRS:

During 2010 the Make Working Pay Tax Credit reduces part of the tax due for the 10% tax bracket.

The 2017 federal tax tables are based on your filing status for the 2017 calendar year.

The 2017 federal tax tables are based on your filing status and number of dependents for the 2017 calendar year.

In addition, the Health Insurance Premium Tax Credit and Tax Penalty for No Health Insurance from last year will continue to apply to your taxes based on your Modified Adjusted Gross Income in 2017.

The tax bracket you fall in is a marginal tax rate and it doesn’t apply to all of your income. For more information, see How Do Tax Brackets Work?

In addition to the tax brackets and 2017 federal tax tables above, you may owe tax under the alternative minimum tax. You can review the AMT exemption to see if it will apply to you.

To figure out what your taxes currently look like, you can use the Tax Calculator.