Why Do Gas Prices Rise and Fall?

Earlier this spring, the cost of a gallon of gas was averaging close to $4 in the US. Analysts were predicting $5 gas this summer, followed by the sun burning out and the moon exploding. Ironically, none of this happened. During the early part of summer gas prices were steadily dropping. A barrel of oil that was close to $100 in April, dropped to $80 in early summer, and is now around $90. In some parts of the US, a gallon of gas went under $3. So what causes the move in prices?

First a quick background of how the oil market works. Oil is traded on the futures market. Basically, you buy or sell a futures contract for a barrel of oil at some point in the future. The reason why oil trades “in the future” is so that businesses can better budget for their costs. Imagine running an airline and having to change ticket prices multiple times throughout the day based on the price of oil. Think about as a consumer buying that plane ticket. It would be a crap-shoot as to when the best time to buy an airline ticket would be. For this reason, among others, oil is traded in the futures market.

A Few Places of Blame for High Oil Prices

Depending on which of our elected officials you listen to (and which party in in office), it’s either the greedy oil companies or the greedy speculators trading oil futures on the open market. Inevitable, the President or Congress (sometimes both) will have hearings to try to determine why gas prices are high. They already know why, but since the average American does not, it makes it look like your President or Congressperson is doing his or her job of looking out for you, hoping to secure your vote.

Their arguments include: to lower the cost of gas, we need to tax big oil more by ending their tax breaks, stop the speculators from trading and release some oil from our strategic reserves. (Isn’t it ironic that this issue seems to come up every four years, of which coincides with the election?) Unfortunately, none of these are the real reason why gas prices rise and fall.

Big Oil doesn’t regulate the price that they sell oil for. The market makes that decision. So getting upset that Mobil or Chevron had a gazillion dollars in profit last year isn’t the issue. They simply place a barrel of oil for sale on the market and it sells for what the market is willing to pay for it.

It Isn’t Speculators Trading on The Market Either

The futures market for oil is a trillion dollar market. To think that the speculators have enough money to control the price of oil is ludicrous. To play devil’s advocate, let’s just say they do have enough power and money to control the market. The fact is that speculators and any investor for that matter, can make money regardless if the price of the investment rises or falls. Their ultimate goal is to not raise the price, but to make money. They can do this when the price rises and they can do this when the price falls. It matters to them not which way the price moves, just that it moves.

It is not all because of supply and demand. This does play a factor, but it is not the overall cause. You can’t make the argument that demand for oil dropped by 20% in early summer when nothing has changed globally. India and China are still growing, needing oil. The US still needs the same amount of oil. The supply hasn’t suddenly jumped by 20% either. OPEC is still supplying the same amount as they were before.

The Real Culprit: The US Dollar

Take a look at the chart below from the Federal Reserve. The green line is US Dollars and the black line is Oil. Notice how they are mirror images? As the value of the dollar rises and falls, the price of oil does the exact opposite. 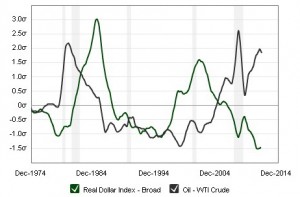 The effect of a devaluing dollar doesn’t stop at the price of oil either. It affects you with every transaction that you make.  As the Federal Reserve continues to pump money into the economy through “quantitative easing”, the value of the dollar drops because there is more supply than there is demand for it.

In an ideal world, the value of the US dollar will rise, but not by too much. Just like too much or too little inflation is a bad thing, so too is too high or low a value of the US dollar. A slow increase in the value of the US Dollar will allow for healthy growth over time of both the economy as a whole and for consumers bottom lines. Because of this, we will most likely never see $2 per gallon of gas again, but that isn’t so much of a bad thing as a slow growth in prices shows that an economy is healthy.

Comments to Why Do Gas Prices Rise and Fall?