Why Am I Unpopular at Christmas? 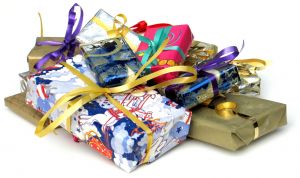 I’d like to think that as the family financial guru, I give the best gifts! I put a lot of thought into each one and come up with gifts that will keep on giving, sometimes for the lifetime of the recipient. So why do people dread my great gift giving ideas?

One of our younger family members just opened a Roth IRA. Her brother is going to open one too. My gift idea? Let’s put some money into their newly opened retirement accounts!

Our niece? We’ve already opened a 529 plan for her with the intent on depositing money each holiday.

For our kids? I wanted the grandparents to put more money into their 529 plan so they could take a bigger tax deduction.

All of the kids have toys already. When they get a new one they play with it for a little while and then move on. At first I tried to keep the toy store out of the house but it really is a tough battle to fight. Especially when you have the first two grandsons on both sides of the family.

Investing for the future is such a terrific idea. Investing early is always a key to success, or at least it has been for us. I keep thinking about 20-30 years down the road when they are all thanking Aunt Madison for setting up these accounts.

And while the college account is nice for our niece, we need to get her a toy too, because opening a certificate isn’t any fun on Christmas Day.

The grandparents want to do “the grandparent thing” and buy toys for the kids. Tons of them. I’m not alone; Paid Twice fights the presents versus college fund problem too.

I found that some battles just aren’t worth fighting. I bring this up every year in some form or another. Last year I tried to give stock certificates to family members before being vetoed. I’ll surrender and give clothes and toys, and let my kids receive toys.

I’ll still contribute quietly to each of their 529 plans but on Christmas morning I won’t be able to avoid calculating how much a $100 in toys would be in 63 years when my toddler hits retirement age. ($40,527 I mumble under my breath at 10% per year.)

And of course I’ll still brainstorm another way next Christmas to force financial freedom on my family. Maybe, just maybe, one of these years they’ll let me run wild with an idea.

Comments to Why Am I Unpopular at Christmas?