Today rocketc writes a guest post for My Dollar Plan. He’s a dad of three who enjoys teaching his kids about money, a subject close to my heart! Find more of his articles at Rocket Finance and subscribe to the Rocket feed. 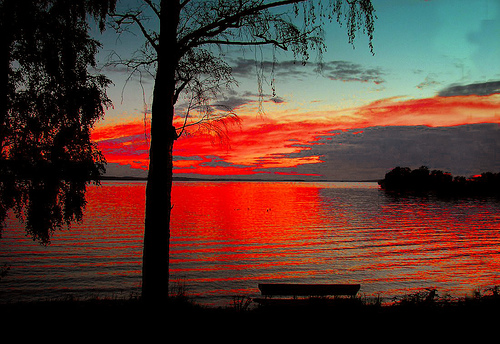 I want to thank Madison for giving me the opportunity to guest post today. She has a much wider audience than my little old blog, please forgive me if I show a little stage fright.

Madison writes about retirement on a regular basis and I want you to consider your retirement goals today. Not how much money you want to save, not your target age to retire, but how do you plan to spend your retirement time and money?

Jacob was born to a 16 year old unwed mother during the depression. He grew up on his grandparent’s dairy farm and did not live with his birth mother until the age of twelve. He never knew his real father. His mother would marry three times.

Lilly’s father left her family when she was nine. After World War II, Jacob and Lilly were married and began a family of their own, while continuing to work and save. Both retired with decent pensions and large savings. Over the last twenty years, Jacob and Lilly have spent their retirement on their 17 grandchildren and 10 great-grandchildren.

Someone recently criticized a purchase that benefited several of their offspring: “But, if you buy that, you won’t have a large inheritance to leave to your family.” However, Jacob and Lilly want to give to their children and grandchildren and great grandchildren and enjoy the benefits of generosity during their lifetime – not in a bequest after death. Jacob and Lilly invested their nest egg in their family and the inheritance that will be left to the family is the loving legacy of a 60+ year marriage.

Donald and Margie had no children. They live as frugally as possible – they built their own home and regularly shop second hand stores. Donald and Margie work in full-time Christian ministry where the pay is not great – their combined income is just over $60,000, however with disciplined living and great investing, Donald and Margie are on target to be worth over 12 million dollars at retirement.

In 2001, the year that contained the stock market crash and September 11th, Donald beat the market by 8%.  The couple can retire anytime they like, spend the rest of their lives traveling the world, and still have money to spare. Instead, they both plan to work until close to the age of 70 and what are the plans for the nest egg? It is to be given away. Donald and Margie cannot wait to donate the gift of a life time to the ministry that they love and where they have invested their lives. Actually, they will give two lifetimes – the lifetime spent in physical work and the lifetime spent in frugal living and careful investing.

Arnie graduated from college and immediately went to work at the local foundry. He started as a machinist, but quickly moved up through the ranks. He was the son of two German immigrants, never married and continued to live at home. He eventually became a vice president in the manufacturing corporation, only to retire at the age of 44.

Why should he continue to work? He was independently wealthy and his parents had saved their whole lives – he would inherit all of it. So how does a 44 year old retiree spend his retirement? By devoting the rest of his life to an inner-city homeless shelter. He ladles soup, does small repairs, counsels “customers” and when they get in a financial pinch, he takes care of that problem, too.

And then there is Pastor Glehn. Mild mannered with a sense of humor, he has pastored several small churches across the Midwest. He is the son of an investment banker from Chicago and learned how to take care of money at his father’s knee. His father was wealthy by any standard and Pastor Glehn was an only child. At the time of his father’s passing, he had no need to work every again, but Glehn wanted something different out of life. He remained in the ministry, and continued to add to the inheritance by frugal living and conservative investing.

Pastor Glehn still types his sermons on a manual typewriter and keeps careful records. He can tell you what his wife spent on soap or anything else in 1974 – or any other year about which you would like to inquire. He is 83 years old and still a full-time pastor. He claims that he is going to “die with his boots on” and spend his retirement in heaven. His multi-million dollar portfolio will go to his church and his children.

So what about you? What are your retirement plans? Live a comfortable, worry-free life with the occasional cruise or round of golf or fishing trip or garden club meeting? Retirement from your is not just about the amount of money and the right age. It is about being free to do whatever you want. At that moment of your life, when you can do anything you want, what will you choose?

If you read My Dollar Plan, you will learn how to be financially secure, but don’t allow acquiring a big nest egg to be your only reason for life.

Comments to What’s Your Retirement Story?