Is There a Student Loan Crisis?

More Students Are Going To College 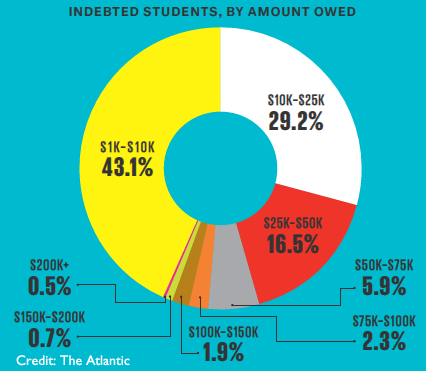 College Graduates Do Have Jobs

Now granted, this does not take into account those that are underemployed or those that have completely given up looking for a job. If we look a little deeper into the statistics, the average weekly earnings of a college graduate are $797. A $25,000 student loan that has to be repaid in 10 years and carries an interest rate of 6.8% has a monthly payment of $287 per month. If you are making close to the average earnings mentioned above, you should have no issue making your monthly student loan payment. See 6 Mistakes of New Earners and How to Fix Them if you are struggling to meet your obligations.

For those that are underemployed, student loans are more generous in terms of payback options. If you have federal loans, you can stretch out payments to 20 years and you can defer payments or forbear payments as well. You can even take part in a new income based repayment plan called pay as you earn where your payment will increase as your earnings do. In addition, for public service workers there is a student loan forgiveness program. The point is, if you have a monthly student loan bill of $300 and you cannot afford it, you should contact the lender and work something out with them. Since student loan debt cannot be discharged in the event of a bankruptcy, lenders are more open to delaying payments because they know they are getting paid regardless.

Where The Student Loan Crisis Is

For the majority of students, there is not student loan debt crisis, as I pointed out above. Where the crisis is though, in my opinion, is hidden in the above numbers. The number of people going on to college is increasing each year. This is a good thing, as a more educated work force is a more productive work force. The problem though is that a healthy part of this group is from low income families. These families tend to not attend the typical four-year non-profit college that most go to. They instead go to the for-profit colleges who in some instances mislead potential students into thinking they will be earning a high salary once they graduate and saddle them with student loan debt that they will have a difficult time repaying.

I think the media should focus on this aspect as this is the real crisis. We need to educate these young people so that they understand what they are getting themselves into. They are blinded by the fact that they are the first one in their family to ever go to college and end up getting hurt. By helping these people out through educating them on student loans and what they can expect once they graduate will go a long way in bettering their financial future.

I don’t want this post to come off sounding as though I don’t think students are in trouble when it comes to repaying their debts. As I pointed out, I think that the majority of graduating students can handle their student loan repayment and that the media really is blowing smoke. I just want you to think about what you hear in the media and not take it for face value, but to question it and look into it. Yes, for the first time ever, total student loan debt has surpassed $100 billion. But is that really a bad thing? It shows that more people are attending college and continuing the lifelong pursuit of knowledge. And according to the chart I showed you, the majority of students don’t have a significant amount of student loan debt either. So why worry about a problem if it really isn’t the problem? By breaking the numbers down we can see what the problem actually is and hopefully we can make strides on correcting it.

What are your thoughts on the student loan bubble the media is currently hyping?

Comments to Is There a Student Loan Crisis?