Do the Rich Pay More or Less in Taxes?

There are furious debates going on right now about whether or not the rich pay enough in taxes and how much certain income earners should pay. You hear one person argue that “the rich only pay 15% of their income in taxes” and another person counter-argue that “the rich pay 40% of all taxes paid.” The idea behind both of these statements is in fact true. Below I present to you the percent of income people pay based on where they fall in terms of income (think 99% versus 1%). Below that, is the percentage of tax these groups pay that makes up the entire pot. 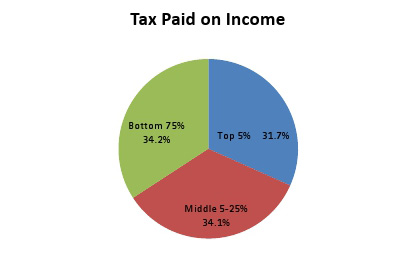 As you can see, those in the top 5% of income earners pay on average 32% of their income in taxes, while the middle income earners and the bottom 75% pay roughly 34% each. Based on this, the argument that the rich pay less in income taxes as a percent of their income compared to lower income earners is true. The reasoning behind this is due to the rich having much of their income in the form of dividends and capital gains. Try out different scenarios with our tax calculator to see how dividends and capital gains change your net taxes. As it stands right now, the tax treatment on these investments is more favorable than ordinary (wage) income. This is one of the reasons why some want to change the tax treatment for capital gains and dividends. By taxing them at a higher tax rate, the rich will have to pay more in income taxes. Therefore, because of the favorable tax treatment of these investments, along with the rich taking advantage of various tax deductions, is why they pay a slightly smaller percentage of their income in taxes. 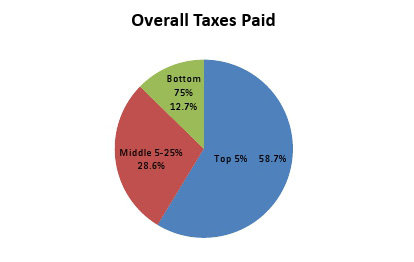 When it comes to overall taxes paid, the rich pay 59% of all taxes, the middle income earners pay 27% and the bottom 75% pay 13%. As with the argument above, this one also is true that the rich do pay the majority of overall taxes. This makes sense since 32% of every dollar earned by the rich goes towards taxes. If a rich person makes $1,000,000 she then pays $320,000 in taxes while someone who makes $25,000 pays 34% or $8,500 in taxes.  Add up all of the millionaires paying 32% and it’s easy to see that from this group of wage earners is where much of the tax revenue comes from.

Is the System Fair?

This is the million dollar question and it depends on your beliefs. The rich take advantage of the deductions they are offered and therefore pay a smaller amount of their income in taxes, but they still pay over half of all of the taxes. I personally don’t feel as though you can set a threshold and say anyone who makes more than a certain amount should be taxed more because they are rich. Cost of living dictates whether or not one is wealthy. One million dollars will get you much farther in Des Moines, Iowa than it will in Boston, Massachusetts.

Readers, what are your thoughts on the numbers provided? Do you think the system is fair? Are there any loopholes that you want to see closed?

Comments to Do the Rich Pay More or Less in Taxes?


Previous article: « 4th Quarter 2012 5% Rotating Cash Rewards Credit Cards
Next article: 12 Ways to Use Up All of Your Flex Spending Account »