As many on the East Coast are dealing with the aftermath of the destruction that Hurricane Sandy left, some who make insurance claims may be in for a big surprise. Many insurance companies have a clause in their policy that increases the policyholder’s insurance deductible when a named storm hits. 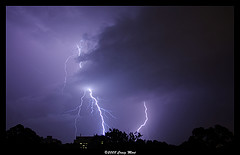 Photo source: Not So Nice Duck

Why A Higher Deductible

It all depends on both your insurance provider as well as the state you live in. Not all states allow this type of clause in insurance policies, but most along the East Coast as well as those along the Gulf Coast do. Those states that do allow this clause often have caps or limits as to how high the specific percentage can be. Louisiana for example caps the percentage at 2% of the insured value.

Even though Hurricane Sandy flooded many areas in both New York and New Jersey, this flooding is not covered by your insurance policy. You only have coverage for the flooding if you purchased separate flood insurance.

Remember that this clause is for named storms. When Hurricane Sandy hit the US coast in New Jersey, it was classified as a “Post-Tropical Storm”. I am not an insurance agent, so I do not know if the named storm still needs a name when it makes landfall or not. I would guess that there will be lawsuits between policy holders and their insurance companies over this and the courts will have to interpret the language in the policy itself.

It’s worth noting that The Weather Channel has decided to name winter storms going forward. Up until now only hurricanes and tropical storms have been named. It is unclear as to how this will affect insurance policyholders going forward should they suffer a loss from a named winter storm.

Hopefully, this does not come as a surprise to you as you read your insurance policy when you received it or your agent walked you through it. If not, your best bet would be to make an appointment with your agent and have them walk you through the policy page by page, explaining everything so that you do understand it. Be sure to ask questions too so that in the event that you have to make a claim, you will have a good idea as to whether or not it will be covered. There is nothing worse than suffering a loss and then finding out it isn’t covered.

Have you had to make any claims resulting from the Hurricane? What has been your experience so far?


Previous article: « What Happens if There is No Beneficiary?
Next article: FedEx American Express $25 Gift Card Giveaway »